You are here: Home>Themes>Wartime>Residents honoured and remembered 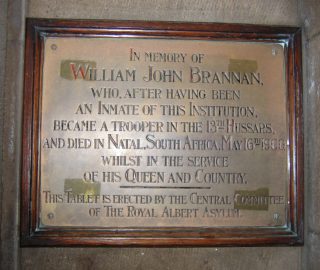 A memorial to William John Brannan, a resident who died in the Boer War
Nigel Ingham 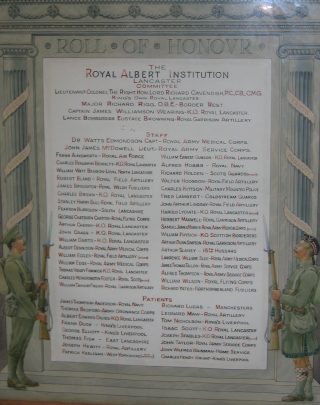 World War One Roll of Honour at the Royal Albert Hospital, Lancaster. This hung in the entrance hall for most of the 20th century.
Nigel Ingham 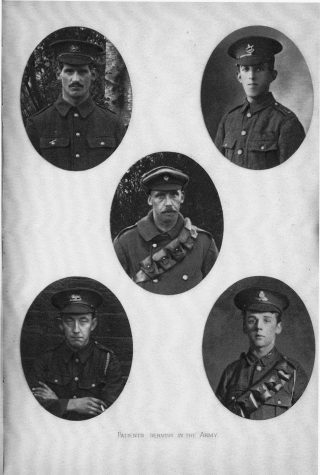 Images of men who had been Royal Albert residents, and had enlisted in the armed forces during World War One. These photographs were in the 1916 Annual Report of the - then named - Royal Albert Institution. Almost certainly, these are photographs of individuals whose names appear on the Roll of Honour.

In the main entrance hall at the Royal Albert Hospital, Lancaster were a framed Roll of Honour and a brass memorial. Both of these remembered residents of the institution who had joined the British armed forces at times of war.

The brass memorial honours William John Brannan, a resident who died in the Boer War in 1900. This plaque was definitely still in place as late as 2008, by which time the former institution had become Jamea al Kauthar Islamic College.

The Roll of Honour remembers staff and residents of the institution who joined up to take part in First World War. Most of the residents had left the Royal Albert by the time they enlisted, but there was at least one who appeared to go straight from the institution to the army. Joseph Stables was recorded as being killed in action, while serving with the Kings Own Royal Lancaster Regiment.

By 2019, the Roll of Honour had spent many years being displayed in the Kings Own regimental museum in central Lancaster. This state of affairs is the result of efforts taken by a Heritage Lottery Funded project, along with the generosity of both the principal of the Islamic college as well as the regimental museum’s curator.