You are here: Home>Themes>Wardlife>Turps, soap, cocoa and lentils… 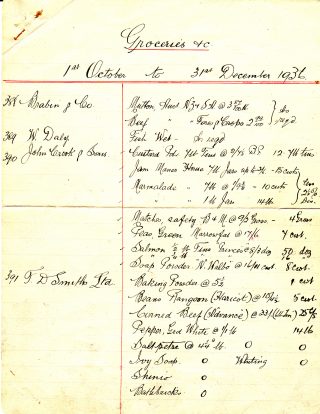 First page of a list of grocery and other items bought by the Royal Albert Institution: October to December 1936.
Courtesy of Joe Alston 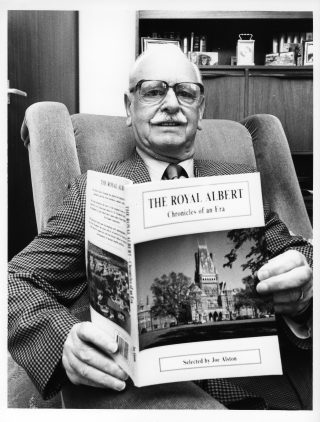 Mr. Joe Alston (c. 1992) with a book on the Royal Albert. After retirement in 1978, Joe Alston explored the institution’s records from its beginnings in 1864, up until it became part of the National Health Service in 1948. The book is a result of his research, along with the editorial and writing expertise of Dr Elizabeth Roberts, an eminent oral historian. A concluding chapter was written by Otto Wangermann, former senior Clinical Psychologist at the Royal Albert. Alston, J. and E. Roberts (1992). The Royal Albert Hospital: Chronicles of an era Centre for North-West Regional Studies, University of Lancaster
Courtesy of Joe Alston

Here is a list of grocery and other items bought by the Royal Albert Institution between October and December 1936.

There are details of the items themselves, their cost and when purchased.

The document was kindly provided by Mr Joe Alston, who started as Stores Clark in 1938. He went on to become the institution’s Steward, and was responsible for buying all non-medical goods.

Downloads
A list of grocery and other items bought by the Royal Albert Institution: October to December 1936. (6 MB Adobe Acrobat document, opens in a new window)