You are here: Home>Themes>Wardlife>"Even if you wanted to see your friend, you couldn’t."

"Even if you wanted to see your friend, you couldn’t." Highvolume Play Pause Stop 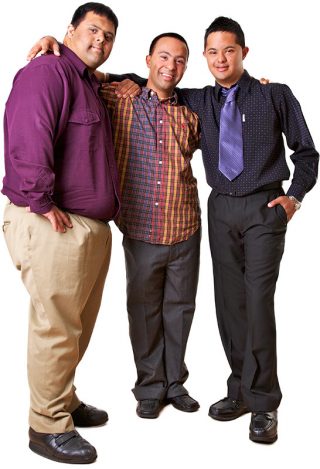 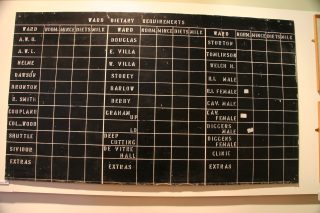 'Ward Dietary Requirements'. This hung in the Royal Albert kitchens and was there when it closed in 1996. It was exhibited (courtesy of Jamea Al Kauthar) in Lancaster City Museum in 2007, when this photograph was taken.
Mandy Cody 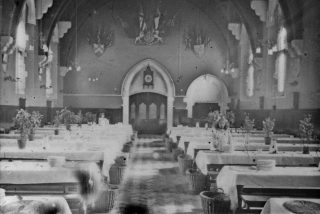 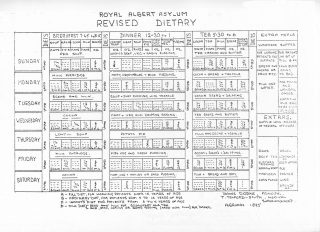 Frank Cochrane and Harry Oldham, former residents, remember the food and seating arrangements in De Vitre Hall at the Royal Albert, probably in the 1930s and 40s.

The discussion follows on from the extracts: “We used to get blackclock soup!” and, before that, “They used to throw food at one another.”

All of the images on this page relate to periods different to the times talked about by Harry and Frank. On the one hand, the photograph of De Vitre Hall (seemingly of a special occasion) and the ‘Dietary’ are many years before either arrived at the Royal Albert. On the other, the ‘Ward Dietary Requirements’ are years after De Vitre Hall was used as a dining room serving a number of wards. However, all three images offer insights into institutionalised mealtimes.

SC: And what did you used to get for breakfast?

Frank: Er, a slice of bread.

SC: Anything to drink?

Frank: Oh it was porridge weren’t it first?

Frank: Porridge. Porridge first and then after that a slice of bread.

SC: Anything on the bread?

SC: And what about to drink? What did you drink?…

Frank: Used to get tea.

NI: How were you served these meals? When you got the bread and the porridge how was that given to you?

Frank: It was given out in big baskets, you know each table had a basket you see, and there was bread in there. And staff used to come and just get hold of the bread and, like that –

NI: Just throw it to you?

Frank: Yes! Yeah. If you got a piece you, they was lucky.

NI: So did people fight over the bread?

Frank: Oh yes. Many, many at time.

Harry: During the war years there was vegetable soup. It was, it was pretty fair like… vegetable soup. And we used to get two slices of bread and the bread was as thick as door steps. That’s true is that. One thick one morning for breakfast, and a thick one at tea time for tea. And everybody, and they got this soup and they also got plate of rice, rice pudding as well with it.

NI: How would you get – How would the rice pudding be served?

Harry: Quite alright. Quite reasonable.

Frank: Used to vary. It was good at one – at one day and then terrible on another day. It varied. It all depends who used to do it. There was some good cooks and some very, very poor ones. There was many a time when it was half cooked, the rice.

NI: And was that, was that served with – did you go and collect tat or did someone come round and serve – ?

Frank: No, no. There was a tin of rice put on each table you see and they used to give it out in ladles.

NI: Right. Did you pass your plate up for that?

Frank: Ah yes. They passed – The lad that was at end of table had to pass them up.

NI: Right, Right. Did the same person always sit at the end?

Frank: Ah yes. You had to sit in your own place everyday.

NI: Right. What happened if you sat in somebody else’s place.

Frank: Well you’d be in trouble.

NI: Did that used to happen?

Frank: Yes. You get took out of dining hall and –

NI: What would happen?

NI: Just for sitting in somebody else’s place?

SC: So who decided which, whose place, I mean who had what place? … Who decided where you would sit in the dining hall?

SC: Yeah. But when you first came to the Albert did somebody take you into the dining hall and say, ‘That’s your..‘

Frank: Yes. And they’d show you…

SC: And that was your place for ever after that, always?

SC: So it always with the same people –

NI: So what happened if you sat next to somebody you didn’t get on with?…

Frank: Well you had to just stop there, that was it. You couldn’t move.