You are here: Home>Themes>Wardlife>"Big, big fellas…" Moving from a boy's ward. 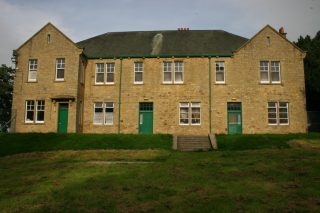 The front of Barlow Home in 2006. This was 11 years after the Royal Albert had closed. By then it was used for educational purposes by the Islamic College, Jamea al Kauthar.
Mandy Cody 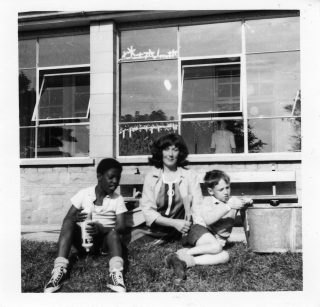 Renee Garth who worked at Barlow Home in the 1960s. She had very fond memories of the boys who lived there, two of whom are in the photo. Forty years later Renee recalled the names of these and other boys in Barlow Home. However, for confidentiality reasons they are not included here. The tin bath was brought into work by Renee for the purposes of play. This photo would have been taken at least 15 years or so after Norman had left Barlow Home. (In the photo is a verandah which had gone by 2006.)
Renee Garth 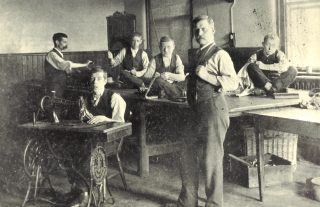 This would have been 40 or 50 years before Norman recalled working there. However, Norman does remember sitting cross-legged on the bench as the boys in this photo are doing.
Lancashire County Council Museums Service

Norman arrived at the Royal Albert, aged 4 years old, in 1941. He went straight to the relatively newly built Barlow Home, which was the boys’ ward at the hospital. After over 10 years there, in the presence of female nurses, he was sent in his mid-teens to Dawson Ward, male (staff and residents) accommodation for older youngsters on the Royal Albert’s ‘Male Side’. In this short extract, Norman describes what must have been a huge change in his life. Norman shared these memories in two recorded interviews in 2005, at home, in the house he had owned since leaving the Albert in 1980.

(Note: The black and white photo of Barlow taken in the 1960s was close to the front steps shown on the colour image.)

NI: And where did you go to on the Male Side Norman?

Norman: Dawson Ward. Went there. That was second ward.

NI: And what was it like going to Dawson Ward?

NI: You were saying that when you went on Dawson Ward –

NI: … Were there ‘big fellas’? Were you saying they were big?

NI: What did you get used to?

NI: And what were the routines that you had to do on Dawson Ward Norman?

Norman: Go to work and come home at five. I used to work in Tailor’s Shop…

NI: What was your job in the Tailor’s Shop?

NI: Had you done that before?

Norman: First time I done it.

Norman: All right. Then you had to put pockets in trousers. First of all doing sitting cross legged on the bench stitching, doing back stitching, that first job.’

NI: And who taught you how to stitch Norman?

Norman: Mrs Pym, a lady…  And another tailor Mr. Jones. He was the boss. Another tailor in next room…  Two Tailor’s Shops.

NI: And how did you come to go to the Tailor’s Shop? Did you choose that or –

Norman: No they give me it.

NI: And who gave it to you?

NI: And do you remember him telling you?

Norman: Yeah. Then after been to see him, go to the ward – after seeing him. You go to the office first, your first day you go to the Male Side.

NI: So when you went on Dawson Ward the first day you were sent to see Mr Hudson (mispronounced) were you?

Norman: Before I went to Dawson Ward.

NI: When you were still on Barlow?

Norman: The same day we went to office, straight to Dawson Ward, from the office.

NI: So who sent you to the office? Do you remember?

NI: And when you went to the office, did you go on your own or did you go with other boys?

Norman: Four of us went.

NI: You all went together?

Norman: Yes. In the same ward, Dawson Ward.  We sit on separate table… First week… Then went to bed at half past six at night. On the Monday stay up for a bit till about ten o’clock. Everybody went to bed at ten. Everybody… Every night.

NI: But the first week you went to bed at half past six?

NI: And then the next week –

Norman: You stay up.

NI: What time had you gone to bed on Barlow Home?

Norman: Half past six.

NI: So how did it feel going to bed at ten o’clock?

Norman: Oh a bit strange. I go to bed anytime I like now at home.

NI: How does that feel?

NI: So you make your own choices now?

Norman: You do now, yes. My own choice.