The main building at Brockhall Hospital 1993. This building would have been here since its first days as Lancashire Inebriates Reformatory, which opened in 1904.
Courtesy of Lancashire County Council Museums Service 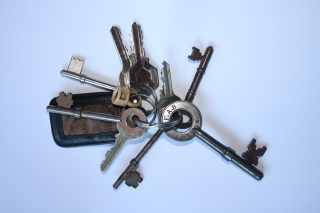 Set of keys from Calderstones
Courtesy of Joanne Marshall

His main involvement was with children. However, if the male adult wards were short staffed they would often ring the children’s wards and ask for staff to come across and help.

He has very positive memories of the leadership on the children’s ward. In contrast he was shocked by the attitudes of those in charge of the male wards.

And there were certain practices – and I think a lot of it was the attitude of the charge nurse or the sister that what went on in the ward – What freedom you had to make changes or propose any changes. Some of the staff – I’ll not say a lot – were more institutionalised than the people who lived at Brockhall. It just had to be that routine! It had to be done that way! And they just couldn’t see through the fog… Their way of doing things. Maybe they’d worked in the hospital for years and years and years and there was just no change in them whatsoever you know.

So how was that for you…?

Extremely frustrating. And I think that was one of the reasons why I was only there for 12 months

The Charge Nurses that I met at Brockhall Hospital I can’t remember their names, I can’t even remember their faces, but I just remember their attitude, and it was, ‘I don’t give damn’ attitude. This is  a cushy life for me. Most of the time they just spent their time in the office, in the background. You would never see them. It was always the two or three auxillaries that were absolutely sweating like crazy, just trying to give some time, some care and attention to each and everyone of those guys that had no life in a sense really. That’s how it came across to me at the time. I know I was young and I’d never experienced this certainly with adults. But it came across to me as, You really have no life.

I can’t remember whether any of the wards that I worked on were locked. But there certainly were locked wards. Yeah. And you would have either the Staff Nurse or the Charge Nurse with a massive bunch of keys on their belt. You’d hear them jingle. You’d hear them coming. Yeah there was a few that – a couple that I can think of that thought they were the bees knees – Because I’ve got the keys on my belt. You’ve got to go through me for EVERYTHING. That kind of attitude, you know.