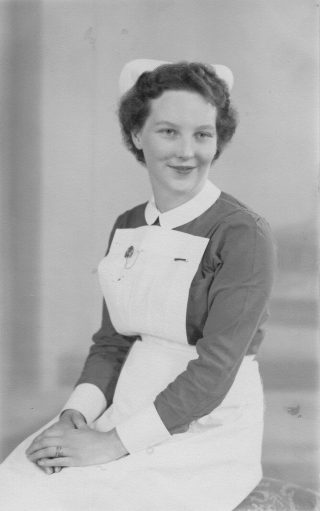 Brenda Kay in 1960 after passing her final exams.
Courtesy of Mrs Brenda Kay.

From 1957 to 1960 Brenda Kay trained at Brockhall to become a State Registered Nurse.

Most of Brenda’s training had been at a time when the 1913 Mental Deficiency Act (and follow up amendments) was still in force. Towards the final year of her training in 1959, the Mental Health Act was passed which repealed the earlier legislation.

However, copies of her final exam paper in 1960 (attached below) still reflect the tone and letter of the 1913 Act.

The morning paper was on ‘Principles of Mental Deficiency Work’.

The afternoon paper was on ‘Principles and Practices of Mental Deficiency Nursing’.