You are here: Home>Themes>Sport>"That's where they used to do PE"

"That's where they used to do PE" Highvolume Play Pause Stop 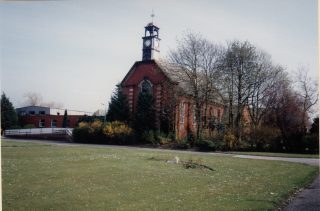 The 'Church Tower', Brockhall. This was the gym in the later years of the institution. The image is dated 1993, so was taken after Brockhall had closed in 1992.
Lancashire County Museums Service 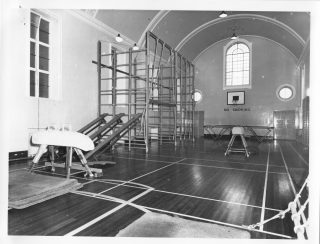 SMG has mixed memories of his life in Brockhall. Here he talks of activities he enjoyed.

“That’s where we used to do PE. There used to be a church tower. I used to go in gym. That’s in – yeah, I remember that. We used to go in gym and all that kind of thing in there. Not a gym it was a PE place … Church Tower we used to call it. I forgot what the name was now… It weren’t a church… PE in there. Like trampolining, rails on walls and all that, we used to do all that. So quite good. Because there were a PE mistress and PE teacher. And they were both good. They used to take us to baths – Shadsworth, Clitheroe and Hyndburn. And they used to take us like on a Monday… Monday and Wednesday I think it were. So I’ve mixed feelings about the place because there’s a lot of good feelings about it, mixed memories of it. On the other hand there’s a dark side to it. It’s like anything else isn’t it?”