You are here: Home>Themes>Special Occasions>"We had some good fun there…"

"We had some good fun there…" Highvolume Play Pause Stop 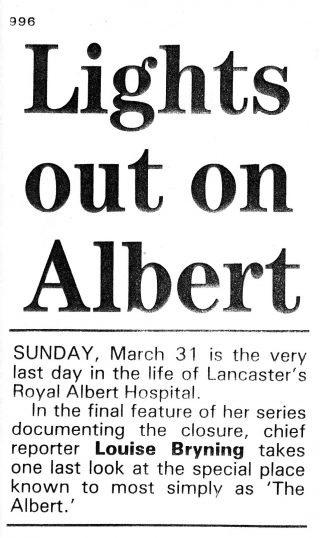 Lancaster Guardian headlines in the week before the Royal Albert closed on March 31st 1996. 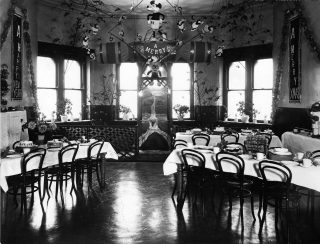 Christmas at the Royal Albert. On the back of the photograph, in fine hand writing, are the words: Christmas 1930 - Room No. 49 The Home of Mickey Mouse
Courtesy of Lancashire County Council Museums Service

Norman left the Royal Albert in around 1980. He had arrived as a four year old about 40 years earlier. After leaving, the rest of his working life was spent at Pye’s Feed Merchants in Lancaster.

In an interview on December 8th 2005, he recalled hearing about the closure of the Royal Albert in 1996.  Also, he reflected on what the institution had meant to him.

So how did you feel about the hospital closing Norman?

“At work at the time. Working I was at Pye’s.

How did you hear about it?

Who told you about it?

And what did that make you feel, to think that it had closed, Norman?

“A bit upset about it… Didn’t like the idea of it. Cos everybody go to community work now instead of using mental hospital.

But you were a bit – Why were you upset about it closing?

“Because the atmosphere, atmosphere good. Good old days. We had some good fun there…

What was the good fun that you had there?