You are here: Home>Themes>Agency & Resistance>"We had to see this doctor"

"We had to see this doctor" Highvolume Play Pause Stop 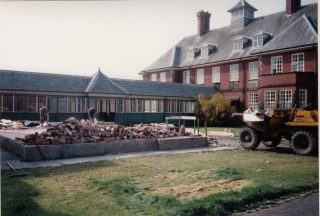 The main building at Brockhall Hospital 1993. This building would have been here since its first days as Lancashire Inebriates Reformatory, which opened in 1904.
Courtesy of Lancashire County Council Museums Service

“We had to see this doctor”

Here he recalls an incident when as a young man a few of them had some fun with a dumper truck. As a result of this they had to go and see the doctor in the main office.

(The back – with a dumper truck – and front of the main office is pictured here.)

And would you ever go in the office?

“If I done anything wrong (laughs!) I remember – it’s a long time ago I can say now – there were about 8 lads and this lad thinking, he got a dumper from somewhere, I don’t know where he got it from. And we all piled into that and went right down sports field.

“Yeah, Yeah. Anyway we got done so we had to stand outside the office – all 8 of us. And then we had to see this doctor. Because we were bad or in trouble we had to see the doctor, to see what punishment we’re going to have. But he let us off sometimes. I’m not generally in that category, you know, in trouble but that moment I thought, I’ll have a go here on that.  I weren’t driving, it were somebody else. But I made some good mates in there as well.

And those on the dumper were they all your mates?

“Yeah most of them were…”