You are here: Home>Themes>Relationships>“I had my letter under my pillow.”

“I had my letter under my pillow.” Highvolume Play Pause Stop

This audio clip is from an interview with Patrick Burke on May 3rd 2016. The other voices you hear are Lynn Welsh and Nigel Ingham. Length of recording: 2minutes 34 seconds 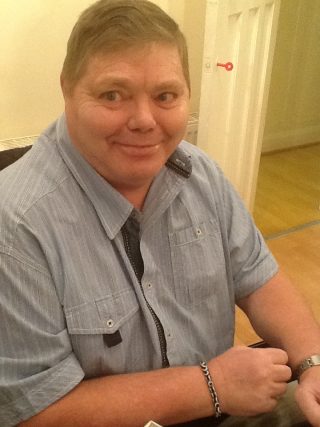 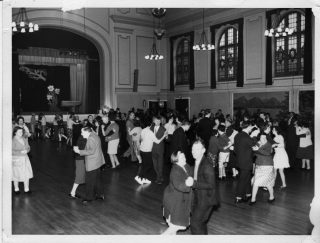 A dance at Calderstones in the main hall. Probably in the 1960s.
Courtesy of David Fitzpatrick

Patrick Burke, born in 1951, was in Calderstones as a boy and teenager in the early 1960s. After his life in this and other institutions, he has become a key member of Merseyside People First.

In an interview in May 2016 he recalled how boys and girls were meant to be kept apart in Calderstones, although people did find ways to be in touch.

“I had my letter under my pillow.”

From an interview with Patrick Burke on May 3rd 2016.

N: So what about girls your same age did they go to school?

N: So did boys and girls, men and women – I know there were all the rules – but did they actually manage to meet?

Yes. Maybe once a month, or once a year they could always meet and write a letter or something like that. You get someone to write a letter to some of the girls. Don’t let the staff see the letter or anything like that! You had to sneak it out! Oh some of our lads, some of our lads in Q2 (Ward) they had to sneak all the letters out. That’s what happened. We all seemed to like the girls an awful lot. That was then.

N: So how did you sneak the letters out?

N:  And would you get letters back?

Oh yeah. Get a letter back off the girls and that. And then they said to see us again and all that sort… I had my letter under my pillow. And the staff come along and… found this letter under the pillow and he read it out. And he said, Right. You’re not going to these dances no more. Because he read the letter. Which he shouldn’t have done. But that was it.

L: And is that the place you mostly met the girls and the other ages of the different people on the different wards. Was it the dances…?

It’s the dances, yeah, yeah. That was the only time when we can meet them is in the dance hall. And don’t forget all the staff were lining up, making sure you don’t touch them or anything like that. And that was that. So you couldn’t – you could say hello to them. You couldn’t even touch or anything. They’d say, If you touch them you’re in trouble. Or anything like that. They were some nice girls there as well.