You are here: Home>Themes>Politics>"I have a right to vote"

"I have a right to vote" Highvolume Play Pause Stop 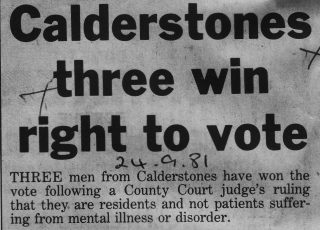 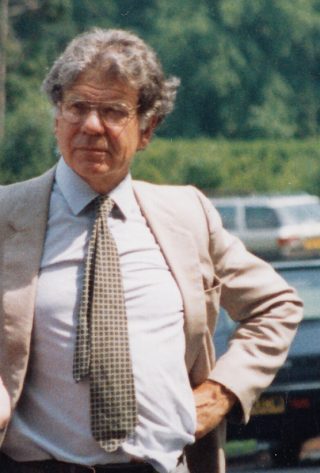 In September 1981, MIND, the mental health charity, Calderstones and three men who were resident in the institution won a historic test case on voting rights for those who lived in long-stay institutions. Although the outcome was not clear cut, it did mean that ‘residents’ were not denied the vote simply because of being in an institution such as Calderstones.

Please listen to Tom McLean’s memories of the day in court.

Tom McLean, who was Divisional Nursing Officer, based at Calderstones recalled the day in court. (Larry Gostin was MIND’s legal advisor.)

“And we went to the Crown Court in Blackburn with these three and appeared before a judge who gave us quite a grilling. Gave me a grilling about the individuals when I’d gone there to talk about the principle. And other people were there to talk about the individuals. And I found it difficult to get out of that but anyway we did. And the three individuals were in court. One in a bed because he couldn’t sit up, and two that were fully ambulant. And in the recess at lunch time he came out without his wig and gown and spoke to all three and was really nice to them. And went back and I remember it started it off very badly for Larry (Gostin). Larry was – it was a hot day – he appeared tieless and in shirt sleeves. And got told to wear a jacket ‘in my court’. And he said, I haven’t got a jacket m’lord. And the judge said, Well you must sit at the back behind somebody because I don’t wish to see you improperly dressed in my court. And these three lads spoke for themselves really. They knew what voting was, they knew what they wanted to vote for and they knew the one party that got the most votes would get in. … And the finding was: Yes these people are quite entitled to their franchise and they are entitled to vote, but this is not a precedent. So we sort of won but didn’t win.”

Comments about this page