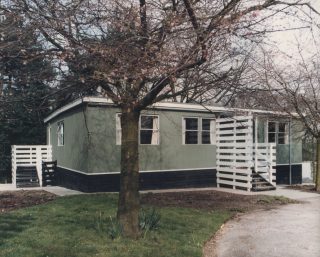 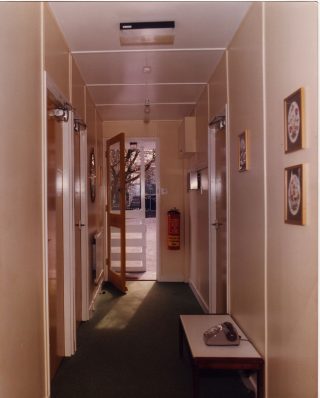 Inside one of the Bungalows at the Royal Albert. 1980s.
Lancashire County Museums Service 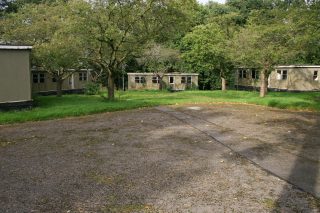 Bungalows at the Royal Albert. This photo was taken in 2006, at least 10 years after they were in use.
Mandy Cody

In the early 1980s at the Royal Albert, Otto Wangermann, (Senior Clinical Psychologist), asserts that ‘eight prefabricated bungalows were hastily erected’, as part of what he calls ‘a constructive resettlement preparation policy’. Their purpose was to support people to live more independently.

The ‘Bungalows’ were ‘hastily erected’ as a response to the shutting down of Richard Smith Ward in the main building of the Royal Albert. In 1978 the North West Regional Health Authority was so appalled at the conditions on Richard Smith that it ordered the ward’s immediate closure. Such a decision was probably of no great surprise to those who had seen that area of the Royal Albert. In an interview on November 17th 2009, Mrs. Ann M. Wilson, the deputy administrator at the time, recalled that:

Some of the wards, there was a basement one – Richard Smith in the Main Building – I mean it was absolutely awful. Most of the patients were doubly incontinent so it wasn’t just the gloom, it was the smell, the whole ambience, it was – I remember that was the one that was the worst and was one of the last to be sorted out.

The ward itself, as a further reflection of changing philosophies of care, was upgraded and in 1979 opened as a Communication Development Centre which ‘introduced signing systems for people with language impairments’.

(These notes based on:

Ingham, N. (2011). Organisational change and resistance: An oral history of the rundown of a long-stay institution for people with learning difficulties. Open University. PhD)