You are here: Home>Themes>Family>Wilhelmina and her family in the 1920s.>"I shall be coming for our child on Sat next" 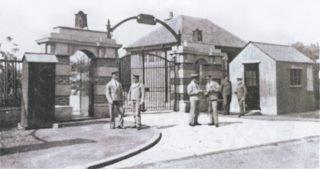 The entrance to Calderstones in the 1920s.
Mersey Care NHS Trust

The documents here chart Wilhelimina leaving Calderstones and returning to her family home in Charlton-cum-Hardy, Manchester.

May 1st 1922 a letter from Wilhelmina D’s father expressing concerns about the delay in arrangements for his daughter to return home.

A letter, stamped May 9th 1922, from Wilhelmina’s father in which he talks about arrangements for picking her up ‘on Sat next’.

January 2nd 1923 Wilhelmina released from her Order of Detention by the Board of Control.

Wilhelmina died in Chorlton-cum-Hardy in 1969, when she would have been in her late fifties.