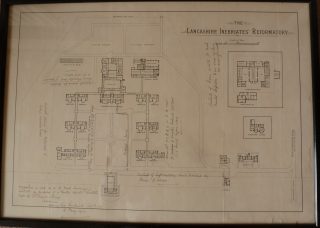 1914 Plan for Brockhall - then known as Lancashire Inebriates Reformatory.
Courtesy of Brenda Kay 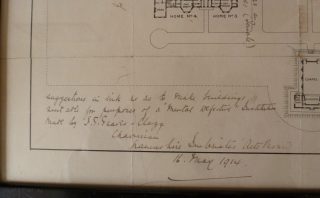 A section of a 1914 plan for changes at Brockhall. . This makes it clear that this plan is to change the use of buildings for a "'mental defective' institution".
Courtesy of Brenda Kay 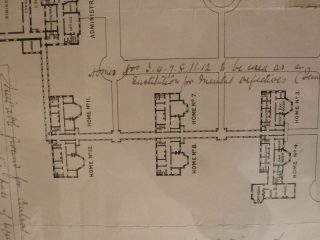 A section of the 1914 Plan. The note about having new accomodation just for women with learning disabilities ('mental defectives')
Courtesy of Brenda Kay

This 1914 plan, with its suggested changes to the Brockhall site, is a key point in the history of that institution.

Brockhall was opened in 1904 as Lancashire Inebriates Reformatory. It was for ‘inebriate’ women. These were individuals who had broken the law while under the influence of alcohol. They were seen by the authorities as immoral, a menace to society and needing to be locked up.

However, by 1915 Brockhall was officially allowed to also take women with learning disabilities, or ‘mental defectives’ to use the language of the time. This 1914 plan, with its written notes, highlights preparations for changes to a “‘mental defective’ institution”.

By the late 1920s Brockall had become an institution purely for people wth learning disabilities – both male and female. It remained as such until its closure in 1992.

(Reference: Heather Hindmarch (1992) ‘Lisieux Hall and the Provision of Services to People with Learning Difficulties in Lancashire’. Lancashire Polytechnic Dissertation)