You are here: Home>Themes>Arrival>"I should never have been here."

"I should never have been here." Highvolume Play Pause Stop 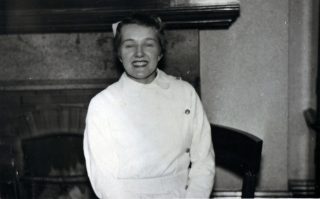 Mrs Creed as a nurse at the Royal Albert Hospital, early in her career
Courtesy of Mrs Creed

In an interview on March 21st 2007, Mrs. Creed recalled a story told to her by one of women she knew in the Royal Albert. Mrs. Creed had started working at the institution as a nurse in 1949.

One day, Mary (name changed) shared her story with Mrs Creed of how she had been admitted to the Royal Albert.

In the interview, Mrs Creed remembered that:

“They used to bury them in b – you know just boxes and put ‘em when I first went – paupers. Because a lot of them, you know, once they were put in the Royal Albert nobody wanted to know really, the families didn’t want to know, you know.

“I mean I can remember one patient talking to me, Mary, a nice, nice person been there for years and years. And she was talking to me one night. And she said, ‘You know, Nurse Creed,’ she said, ‘I should never have been here.’ And I said, ‘Well why is that, Mary?’ She said – and she’d been there, she was an old woman, you know, getting on. She died actually. She said, ‘I – ‘ She was a bit backward school-wise and so she stayed at home for her sister and her (sister’s) husband. And did the cleaning and looked after the house and things. And one day she was in the bedroom, she told me, and the husband come and started being nasty and her sister caught them. And that’s why she was in the Royal Albert. All those years.

“And, do you know, it brings tears to my eyes. And I thought that was terrible. She blamed Mary, you know. And – yeah – it still does now.”