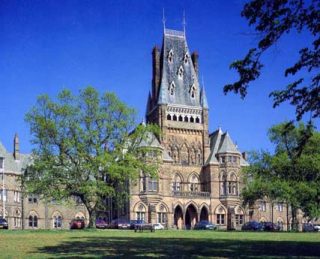 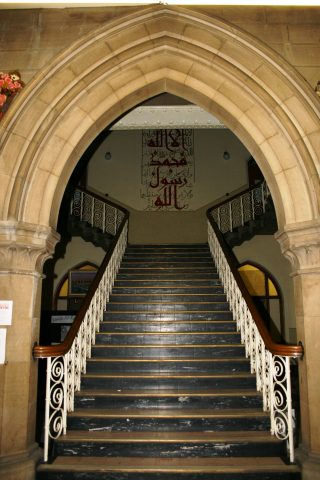 The main entrance hall at the Royal Albert Hospital. Photograph taken in 2006 when it had become Jamea Al Kauthar Islamic college.
Courtesy of Mandy Cody

The site of the Royal Albert Hospital

At a time when the dominant legislation (i.e. the 1845 Lunacy Act) muddied distinctions between learning disability and mental illness, the Royal Albert Asylum (as it was then known), Lancaster, was only one of 4 regional institutions in England set up specifically for the care and education of children with learning disabilities. Admitting its first patients in December 1870, the Royal Albert’s establishment owed much to the vision and energy of one Lancaster based man (twice the city’s mayor), Dr. Edward Dennis de Vitre, who ensured that its primary focus was on those young people with learning disabilities aged between 6 and 15 years who, ideally after 7 years in the institution, would be able to leave and lead useful lives in the outside world.

Taking patients from the 7 English Northern Counties the institution was seen as a source of local and regional civic pride, its existence as a voluntary hospital dependent upon public subscriptions gleaned from the pockets of aristocrats, members of the business community as well as ordinary working men and women – particularly from the Lancaster area but across most of the major Northern towns and cities. Arguably one less palatable aspect of the institution’s training ethos at this time was that it prioritised the selection of those individuals who were perceived as ‘more able’. Numbers grew and its large site, overshadowed by the imposing main building, had by 1909 become home to 662 patients.

However the early part of the twentieth century saw dramatic changes in the ethos of the Royal Albert, and in effect set the scene for the rest of its development until its closure in 1990s’. Pivotal to these changes was the impact of the 1913 Mental Deficiency Act, and with it the increasing influence of the state (via the Board of Control) in the affairs of the institution.

In 1916 the Royal Albert’s authorities were told, in apparent opposition to their dominant policies at the time, that no more than 10% of its patients should be under 16 and receive training, and importantly that there would be no educational grants available for those aged over 16. In addition, and much to the consternation of the institution’s authorities, the Royal Albert was now under pressure to admit patients it had previously believed were ‘helpless’. In 1923, for instance, the Central Committee states in its report that it is pledged ‘to proceed with the erection of a custodial block for low grade cases.’ However there was now increasing acceptance by the institution’s Medical Superintendent – in line with the eugenicist spirit of the 1913 Act – that life long segregation in institutions was the most appropriate way to respond to the needs of people with learning disabilities.

By 1948, when the institution lost its voluntary status becoming part of the new NHS and renamed the Royal Albert Hospital, it had changed considerably from its early days as a voluntary institution. (Although it is worth pointing out that even in the 1940’s there was still pride expressed by the Medical Superintendent in those patients who had left and were earning good wages). Of the 662 patients in 1909 85% were under 15 and 504 of its total number had been there less than 10 years.

This is in stark contrast to 1948 when of its 886 patients 45% were aged over 35 with only 12% being under 15; furthermore most of those living there could be classified as long stay patients. While the earlier asylum had been designed to prepare young people for wider world, now its primary purpose was to segregate individuals of all ages from that same environment. In line with these developments the numbers continued to rise, so much so that during the 1960’s and 70’s the hospital experienced serious overcrowding with the patient population exceeding 1,000. The following years saw reductions in patient numbers as community care policies started to impact.

It closed in 1996, when it became Jamea Al Kauthar Islamic College.