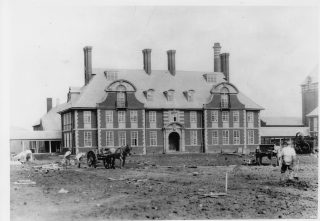 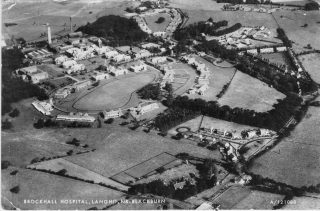 On this aerial view you can see the large circle of buildings in the foreground which was the female side of Brockhall. In the distance the other circle of buildings, with the tree in the middle, consisted of all the adult male wards. The date for the photograph is unclear. It is likely to be before the 1980s. The photograph is part of the album called - Brockhall Photo Album 1980-85.
Courtesy of Lancashire County Council Museums Service 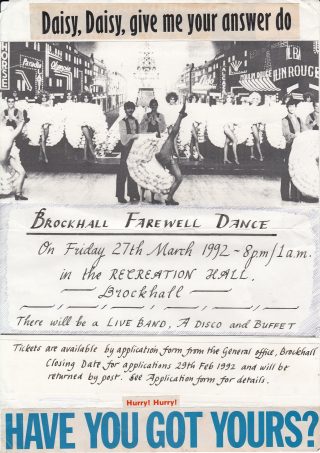 The site of Brockhall Hospital

Brockhall was opened in 1904 as an institution for inebriate women under the Inebriates Act of 1898. This act was designed to reform habitual drunkards and inmates of the institution were sent by the courts. In the 1911 census 192 women were recorded as being inmates of Brockhall with 34 staff. It was intended to build a section for male inebriates on the same site but this was never realised. The inebriates legislation seems strange to 21st century readers but the context was that there was a great enthusiasm for building institutions to separate people who had problems or were seen as problems to others, inebriacy was was just one of the issues that policy makers were concerned about.

The institution remained relatively small until the early 1920s when it formally became an institution for ‘mental defectives’. Its 17th Annual Report records that on the May 17th 1920, ‘the last Inebriate was released from the Institution… the license as an Inebriate Reformatory was in consequence cancelled, and a licence for 308 patients granted under the Mental Deficiency Act.’ Although the formal reclassification happened at that point it appears that there had been a gradual change as Brockhall admitted more people described as mental defective and less inebriates. Even by 1911 there were 57 women classified as mental defective on the books.

Between 1921 and 1933 Brockhall was managed as part of its much larger, but recently built neighbour, Calderstones. The arrangement is likely to have been influenced by the fact that the Medical Superintendent of Brockhall, Dr Gill, was appointed to be the First Medical Superintendent of the Calderstones Institution. The Matron of Brockhall was also appointed to work across both places. In 1929 the Lancashire Asylums Board decided to start a huge increase in the size of Brockhall and this resulted in it becoming a separate institution in 1933 with its own senior staff.

Brockhall followed the model of other large institutions for people with learning disabilities in that there was strict segregation of the sexes and in many ways it was two institutions with one for men staffed by male staff and the other for women staffed by women. A medical superintendent managed the whole institution.

In 1948 Brockhall became part of the newly established National Health Service and began to be known as a hospital. As far as we know the change made little difference to the life of the institution itself. The post Second World war years were characterised by severe shortages of staffing and a great deal of management time was taken up with trying to recruit staff from both the UK and abroad.

Significant changes took place in the early 1970s as the government responded to institutional scandals to put money into Brockhall and similar hospitals. The large wards were divided into smaller units and residents were offered more choice about aspects of their lives. These changes continued until the decision was taken to close Brockhall after it had once again almagamated with the nearby Calderstones institution. Residents who had not been resettled into community settings went to live at Calderstones and Brockhall finally closed as an institution in 1992.